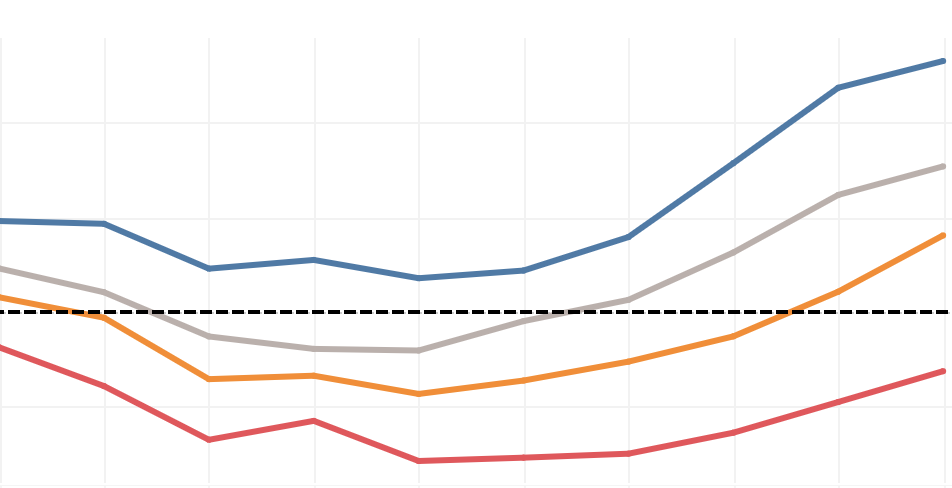 The growth or decline of jobs, often benchmarked by the unemployment rate, is the default measurement of economic wellbeing. However, income from jobs is another excellent way to assess economic change. The source of this data is the Quarterly Census of Employment and Wages from the Bureau of Labor Statistics, and accessed from the D4 data portal from the NC Department of Commerce.

The data visualization tool we created measures percentage change in taxable wages with 2000 as the benchmark year. Every subsequent year up to 2016 is measured as a percentage change from 2000. All years are in 2016 dollars.

The top graph summarizes the change for (from top to bottom) the six urban counties, the state average, the 14 suburban/regional city counties, and the 80 counties the Center defines as rural. In 2016, rural counties collectively were still six percent below the taxable wage level of 2000. However, the trend has improved from the 16 percent decline in 2011. This six percent decline is a total of $350.5 million.

Rural North Carolina is diverse. The bottom visualization is designed to select an individual county and compare its trend line against the average for its county classification. Therefore, if you select Richmond County you will see its trend as compared to the total of all rural counties. It is worth noting that some rural counties close to growing metro regions are doing well, counties such as Johnston and Franklin for example.

The geographic distribution of change in taxable wages since 2000 tells a story of the financial impact resulting from the decline in manufacturing. The western Piedmont counties of Wilkes, Caldwell, Rutherford, and others had a strong base of manufacturing jobs. This is also the case for Montgomery, Richmond, and Scotland counties.

The Charlotte and Triangle regions did well, as we have come to expect. It is interesting, however, to see the influence of retirement/second home destinations of most of the southwest mountains and the coast. Most interesting of all is the positive growth in the counties in the middle of the eastern region: Sampson, Duplin, Bladen, Wayne, Lenoir, and Wilson counties.

Taxable wage levels are improving in rural counties, but if you look at the change from just before the Great Recession we see a very mixed picture. Thirty-three counties had positive wage growth between 2007 and 2016, but 47 rural counties had an aggregate decline of $289.7 million. Jobs alone are not an adequate measure for determining the long road to economic recovery.