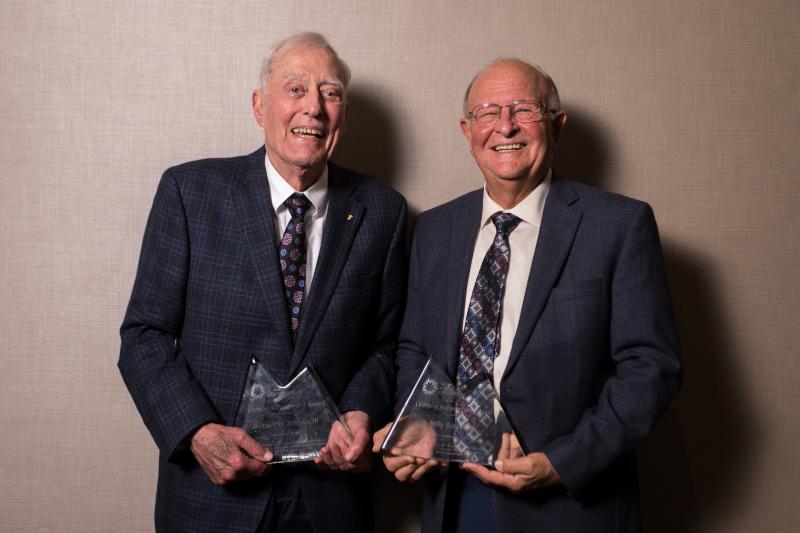 The Rural Center Lifetime Achievement award is given in appreciation and recognition of extraordinary contributions to improving the quality of life of rural North Carolinians. It is the highest recognition that the NC Rural Center can bestow upon an individual.

“On the occasion of the Rural Center’s 30th Anniversary, we had no doubt about who should receive our first lifetime achievement award,” said Rural Center President Patrick Woodie. “It is hard to think of two greater champions of rural North Carolina than Bob Jordan and Billy Ray Hall.”

Robert B. Jordan III served as Lt. Governor of North Carolina from 1985 to 1989. During his time in office, he helped launch the NC Commission on Jobs and the Economy, which led to the establishment of the NC Rural Center in 1987. He served in the North Carolina Senate from 1976 to 1984.

“Bob Jordan’s public service career and his private business career can be characterized as distinguished beyond compare,” Woodie said. “And through it all, Bob remained devoted to improving the lives of rural North Carolinians through economic opportunity and educational access.”

Billy Ray Hall was the founding president of the NC Rural Center, leading the organization from 1987 until his retirement in 2013, taking leaves of absences twice when Governor Jim Hunt assigned him as director of the Redevelopment and Disaster Recovery effort for North Carolina after Hurricanes Fran and Floyd.

“During more than a quarter century of seismic change in the state’s rural economy, Billy Ray spearheaded the development of a state rural strategy focused on economic diversity, innovation, and the empowerment of rural people and communities,” Woodie said. “His career was singularly focused on long-term, sustainable, and equitable ways to improve the lives of rural North Carolinians.”

About the NC Rural Center
For 30 years, the NC Rural Center has worked to develop, promote, and implement sound economic strategies to improve the quality of life of rural North Carolinians. The Center serves the state’s 80 rural counties, with a special focus on individuals with low to moderate incomes and communities with limited resources.